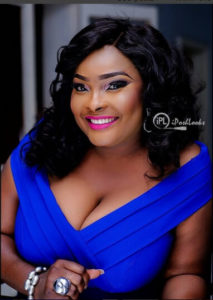 Beautiful and well endowed Ronke Odusanya is a Nigerian actress known for her exciting roles in yoruba movies.

She rose to fame after starring in the award winning Funke Akindele comedy movie “Jenifa”.

She has also featured in several movies including; Larodo Ojo, Ayo Awuro, Pami Kinku and many others.

Here are are other 10 unknown facts about the actress.

3. She’s born into a Christian home.

8. She’s also known as Flakky Ididowo, a name which she got in 2006 for her role as Folake in Fathia Balogun movie.

9. She was alleged to be dating fuji star, Alabi Pasuma, a relationship which didn’t last long and both have become friends.

10. She has won numerous awards including the Best supporting actress in City People awards (2013).