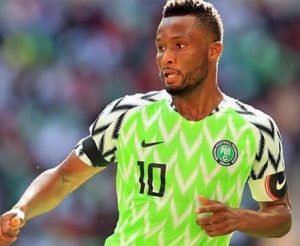 Born John Michael Nchekwube on April 22, 1987, popularly known as John Mikel Obi, is a Nigerian professional footballer who plays for Tianjin TEDA, a club in the Chinese Super League.

John Mikel Obi was born and raised in Jos, the capital of Plateau state.

Mikel who is a native of Anambra state (from south eastern part of Nigeria), is the son of Michael Obi, a bussinessman who runs an interstate transport company in Jos.

The name Mikel came up when the Nigerian football Association (NFA) mistakenly submitted his real name Michael as “Mikel” for the 2003 FIFA under-17 world cup tournamnet in Finland and ever since then he had preferred to be called Mikel.

Mikel Obi started his football career at the age of 12 where he was picked up by the Pepsi football Academy, a scouting team in Nigeria.

He was selected by the scouts to play for one of the top club side in Nigeria, Plateau united, as side already known for developing stars like Celestine Babayaro, Victor Obinna, Chris Obodo and so on.

He soon came to prominence after his outstanding performance at the 2005 world cup youth championships in Netherland, where he helped Nigeria reached the final before they eventually lost to 2-1 to Argentina. He was awarded the silver ball, being voted as the tournaments second best player behind Lionel Messi.

After the competition, Chelsea and Manchester United were already in a bid to sign the young star before he finally made his decision to join the Chelsea football club.

However, on January 6, 2017, Mikel Obi had signed for the Chinese club side, Tianjin TEDA on a free transfer.

Mikel Obi was formerly earning a salary of E82,000 per week in Chelsea plus other bonuses and now earning E140,000 per week at the chinese club.

Photos – Mikel Obi and his family 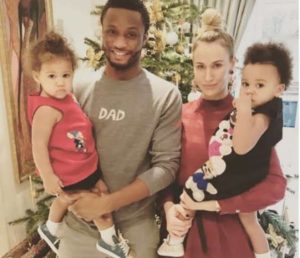 Mikel Obi is married to his Russian wife, Olga Diyachenko who is also a model. They have two kids together.