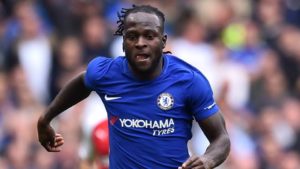 Born Victor Moses on December 12, 1990, is a Nigerian professional footballer who plays for Chelsea football club.

Moses who was born in Lagos part of Nigeria, was just 11 years old when his parents were killed.

Moses who also have an elder brother and other siblings, travelled immediatelly after the incident to Britain where his expenses were paid for by relatives.

He went to Stanley to Stanley Technical High school (now known as the Harris Academy) in South Norwood.

Victor Moses was approached by Crystal Plae where he began his professional career before he caught the attention of Wigan Athletic where he made his premier league debut in 2010.

After two years, he was signed by Chelsea but tranfered on loan to Liverpool at the second season and also on loan transfer at Stoke city and Westham United on his third and fourth season.

On his return to Chelsea in 2016-17 season, he impressed the coach Antonio Conte during the preseason and was included in the first team squad.

Pictures of Victor Moses and his wife 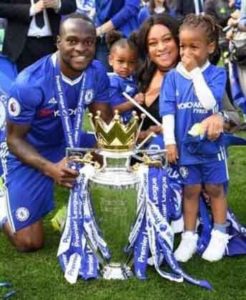 Victor Moses got married to his wife, Josephine in 2017 and their union is blessed with two kids.

Moses who earns weekly salary of $100,000, owns fleet of cars including Mercedes Benz, Ford BMW, Ferrari and so on.

Victor Moses has an estimated net worth of E12 million as at 2018.