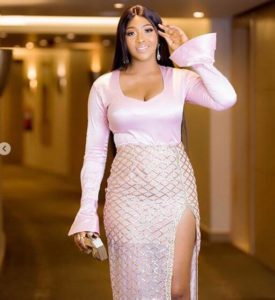 Lilian Esoro is a popular nollywood actress, event planner, hairstylist and television presenter known for her role as Nurse Abigail in the television series “Clinic Matters”.

She was born on March 9, 1985 in Imo state and the youngest in a family of seven children.

Linda Esoro had both her primary and secondary education in Katsina state, northern part of Nigeria and obtained a bachelor’s degree in Political science at the University of Abuja.

Lilian started acting at a very tender age and joined the Nigerian movie industry in 2006 where she made her debut in the television soap opera ‘Extended family”.

She came to limelight with her role as nurse Abigail in the Africa magic television soap opera “Clinic Matters”.

Ever since Lilian rose to fame, she has starred in several movies and television series such as Extended family, Tinsel, Clinic matters, Secret room, Couple of days, Meet the in-laws, Fool’s paradise, taste of love, Strive and many others.

Lilian Esoro got married to the CEO of Triple MG, Ubi Franklin on November 1, 2015 and their marriage is blessed with a son.

Lilian was nominated for the best actress in a comedy at Africa magic viewers choice award.

Lilian Esoro is one of the influential and highly sought after Nigerian actress with an estimated net worth of $450,000 dollars.