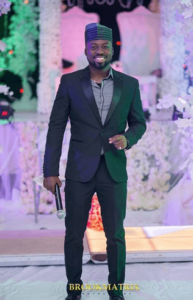 KlintonCod whose real name is Ekene Clinton Egbuna is a UK based Nigerian comedian and MC known for sharing short comic clips online.

He obtained a degree in Biomedical Science from Anglia Ruskin University in UK and a masters degree in Public Health at University of Bedfordshire.

Clinton worked as a project manager in London based health consultancy for few years before he later went for a second masters degree in Adult Nursing at same University of which he dropped out few months later when he realized his potential for comedy.

KlintonCod started off his career in the industry as a gospel comedian while delivering powerful performances across various parishes with his undiluted anointing to make people laugh.

Aside comedy, he is also a content creator, social media consultant and Master of Ceremony.

No informtion as regards his wife but he has a cute son named Noah. More updates soon.