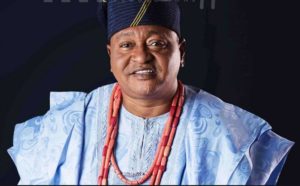 Jide Kosoko is one of the popular veteran Nigerian actor, movie producer who is known for intriguing roles in Nollywood movies.

Apart from Odunlade Adekola, Kosoko is also known for memes across the various social media platforms.

It will also interest you to know that most of the actor’s family members are also into acting including his late wife, Henrietta Kosoko who was also popular actress.

Here, we will break down Jide Kosoko biography for you to know more about him and how he has grown to become one of the most sought after actor in the movie industry.

He was born on January 12, 1954 to the Kosoko royal family in Lagos Island, Lagos state.

He attended his primary and secondary education in Lagos state and studied business administration at Yaba College of technology.

He started his acting career as a child actor in 1964 with a television series “Makanjuola”.

Ever since then, he has featured and produced several movies with his first production being “Asiri Nla” in 1992.

Kosoko had a total of 4 wives of which 3 of his wives are late.

Just after the death of his first wife, the actor was involved in a romantic relationship with two ladies which led to marrying them.

Sola Kosoko who is also an actress, is the daughter of his late first wive.

Jide Kosoko’s late wife, Henrietta Kosoko was also a popular actress who died at the age of 53 on June 5, 2016.

The actor presently have only one wife, Kareemat Kosoko and does not intend to marry again.

The talented actor who is known for his roles in popular movies such as The Figurine, Last Flight to Abuja and Jenifa, has featured in over 200 Nollywood movies which include:

Kosoko is an ambassador for Western Lotto along with the likes of Olu Jacobs, Zack Orji, Ramsey Nouah, 2face Idibia, Alex Usifo and so on.