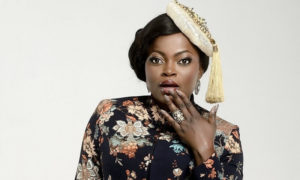 Funke Akindele is one of the most talented actress the nollywood industry can boast of both within and outside the country.

Funke who acts in both Yoruba and English movies, is a delight to watch on screen.

She has captivated the heart of movie lovers with her amazing interpretation of roles and excellent delivery of scripts.

Funke Akindele, now Funke Akindele Bello, is an actress, producer, entrepreneur and philanthropist known for her role in the popular sitcom “I Need To Know” and got her big break in 2009 for her lead role in the movie “Jenifa” starring alongside Mosun Filani, Ronke Odusanya, Olaniyi Afonja, Eniola Badmus and so on.

Ever since she came to limelight, she has appeared in more than 100 movies such as A Trip to Jamaica alongside Ayo Makun (AY), Atlanta, , Agbara Ife, Isoken, Omo Ghetto, Aje Meta alongside Odunlade Adekola, Maami and of course the very popular television series “Jenifa’s diary” which stars the likes of Lolo, Falz, Fisayo Ajibola, Aderounmu Adejumoke and Juliana Olayode also known as Toyo Baby.

Here are the 7 other interesting things you probably don’t know about her.

1. She was born Akindele Olufunke Ayotunde on August 24, 1977 in Ikorodu, Lagos state.

2. She has two siblings and she is the second child in a family of three children.

3. Her mother is a medical doctor while her father is a retired school principal.

4. She obtained her ordinary National diploma (OND) in Mass Communication from Moshood Abiola Polytechnic and also got a degree in Law from the prestigious University of Lagos.

5. Funke got married to Adeola Kehinde Oloyede on May 26, 2012 but ended up in divorce in July 2013. She later remarried to the Nigerian rapper, Abdul Rasheed Bello, popularly known as JJC Skillz in a private ceremony in London in May 2016.

6. She has won numerous awards for her efforts which include:

7. Funke Akindele who has an endorsement deal with Iroko Tv is one of the top earners in the nollywood industry edging out the likes of Genevieve Nnaji and Kate Henshaw. She has an estimated net worth of $3.5 million dollars.