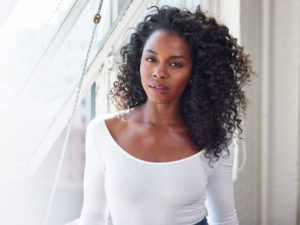 The ever beautiful looking Deborah Ayorinde is a British American television and movie actress born on August 13, 1987 in London, England.

She is of Yoruba descentas her parents were born in Nigeria.

She and her sister were the first generation to be born outside Nigeria.

Deborah Ayorinde is mostly known for her role as Candace in Netflix’s 2016 original series lUke Cage.

She started acting at a very tender age of 7 while performing in school drama in the Forest Gate area of London.

Deborah Ayorinde studied Film production from Howard University where she won the coveted Paul Robeson Best actor award for her performance in a short film she wrote and directed.

The beautiful actress has starred in many movies including Barbershop: The next cut, Bad ass 3, Girls Trip and so on.