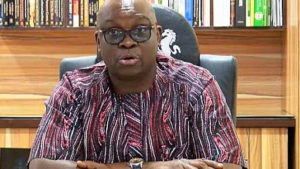 Peter Ayodele Fayose who is simply known as Ayo Fayose is a Nigerian politician and governor of Ekiti state born on November 15, 1960 in Omu Ekiti.

Fayose grew up in Oyo state but originally hails from Afao Ekiti in Irepodun local government area of Ekiti state.

Here are the other 5 interesting things you probably don’t know about him.

2. He obtained a Higher National Diploma (HND) in Biological studies at Ibadan Polytechnic.

3. He worked as the chief executive officer at Spotless Investment Limited.