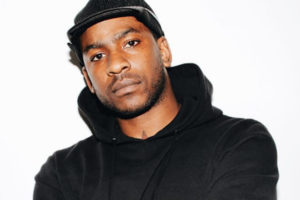 Skepta whose real name is Joseph Junior Adenuga is a British Nigerian rapper born on September 19, 1982 in Tottenham, United Kingdom.

He is the brother of fellow musician Mme and radio presenter Julie Adenuga.

Skepta is the eldest of four siblings and grew up on Meridian Walk Estate, a council estate in Tottenham, North London.

Skepta was originally a DJ from Tottenham based grime crew Meridian Crew and released a number of instrumentals, the most notable being DTI and Private Caller, the latter of which was released as a single and vocaled by various other members of Meridian Crew.

His first single was “Rolex Sweep” in september 2008 before the rlease of his album Microphone Champion in June 2009. He later dropped the single “Too Many Man” with Jme, Wiley, Frisco and had released five singles off his third studio album ‘Doin It Again.

Skepta’s recent single Bad Energy featuring Wizkid has been gaining massive airplays across the country with remixes from several artistes.

Skepta has won numerous awards such as Best Video for “That’s Not Me’ ft. Jme at MOBO Awards, Best Song for ‘Shutdown’ at MOBO Awards, Album of the year for ‘Konnichiwa’ at Mercury Prize (2016), Best International Act, UK and Best Britsih Male at Bet Awards (2016) and many others.

Skpeta is one of the most ingleuntial British Nigerian rapper with an estimated net worth of $ 2 million.

Below are the 10 other interesting things you don’t know about Skepta.

1. He was given the chieftancy title of Amuludun of Odo-Aje in his Nigerian hometown in Ogun state.

2. The rapper had revealed on instagram that he’s having his first child but never mentioned the identity of the baby.

4. His video for “That’s not Me” which won him an awards at MOBO Awards only cost him £80 to make.

5. He is romantically linked with supermodel Naomi Campbell.

7. Skepta and JME ar blood brothers. The rapper is three years older than his sbling. They also have a brother Jason who produced three songs on ‘Konnichiwa’ and a sister called Julie who is a radio presenter.

10 Skepta also have mixtape such as Been There Done That, Community Payback, Blacklisted, The Tim Westwood Mix.