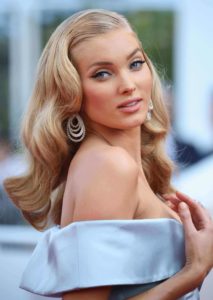 She was raised in Stockholm by a Swedish father, Pal Hosk and Finnish mother, Marja Hosk and also grew up with her two sibling (older brothers), Johan Hosk and Lukas Hosk.

Elsa Hosk started her modeling career at the age of 15 after her father submitted photographs to a local agency at the advice of a family friend who was also a model.

Hosk had to balanced her modeling career with her professional basketball career before finally leaving basketball to pursue full time career in modeling.

After modeling for a few years in Sweden, Hosk relocated to New York city where she was offered a contract by IMG Models and then hired as a model for ‘Guess’ and ‘Ugg’ two of the biggest fashion brands in the world.

She has also worked for big brands such as Dior, Dolce & Gabbana, Free People, Ungaro, H&M, Anna Sui, Lilly Pulitzer and so on.

Elsa has also been dating British businessman Tom Daly since 2015.

Elsa Hosk is one of the most influential Swedish model with an estimated netw worth of $5 million dollars.