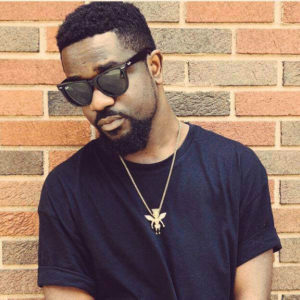 Sarkodie is the fourth of the five children born and raised in Tema to his single mother, Maame Aggrey. He also has three older siblings and a younger one.

He is popularly known as one of the pioneer of the Azonto genre and dance.

He is simply a versatile artiste with diverse musical styles and also raps in his native language Twi.

He started his career at a very tender age as an underground rapper where he appeared on Adam FM’s rap competition Kasahare Level and that was how he met his former manager Duncan Williams of Duncwills Entertainment. He also met musicians Edem and Castro who got him introduced to Hammer of the Last Two, an established record label.

Hammer featured him on two of his songs off the Volta Regime album after being impressed with his rap flows.

Sarkodie later became a household name with the release of his first hit single “Baby” featuring Mugeez of R2Bees.

He released his first debut album “Makye” in 2009. The album featured the likes of Kwaw Kese and J-Town with production credits from Killbeatz and Jayso.

Off his second album, Rapperholic, Sarkodie released some lead singles such as “You Go Kill Me” Ft. EL, “One Time For Your Mind” and “Living Legend”. He also recorded a remix to the song “You Go Kill Me” featuring Wizkid and Ice Prince. The Rapperholic album features guest appearances from the likes of Chidinma, Efya, Mugeez of R2Bees, Obrafour, Jayso, EL and so on.

His third studio album, Sarkology was released on October 30, 2013. It features the likes of Davido, AKA, Fuse ODG, Banky W, Tiwa Savage, 2face Idibia, Joey B, Efya and so on.

Sarkodie’s fourth album, Mary was named after his late grandmother who died in 2012.

His 5th album, Highest was released on September 8, 2017. The album which was released through Sarkcess Music and Dice Recordings, comprises of 19 songs with 3 interludes and a bonus track. It features guest appearances from Jesse Jagz, Moelogo, Flavour, Korede Bello and Victoria Kimani with production credit from Masterkraft, Jayso, Tspize and so on.

Aside music, Sarkodie is also an entrepreneur who ownsa clothing line “Sark by Yas”. He also has endoresement deal with big brands Samsung electronics, fanmilk Ghana and Tigo Telecommunications Ghana.

Sarkodie got married to his longtime girlfriend, Tracy on Jukly 17, 2018 in a private ceremony held in Tema. Their union is blessed with a daughter, Adalyn Owisi Addo.

He has won numerous awards which include;

He was also named 8th most bankable artist in Africa by Forbes in 2013. He was ranked 6th on the list of Hottest Africa MC’s in 2014 by MTV Base and was also ranked 1st on the list of top 10 Ghanaian rappers of all time in 2013 by Lynx TV.

Sarkodie who has fleet of cars and mansions in Ghana, is one of the most influential Ghanaian rapper with an estimated net worth of $10 million dollars.