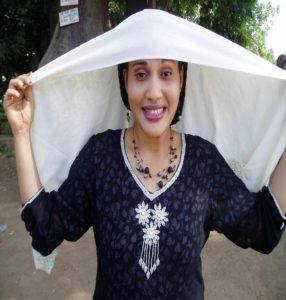 Safiya Musa is a popular Kannywood actress and philanthropist born on September 5, 1985.

Safiya is one of the most sought after hausa actress known for her role in the movie “Madadi”.

She has remained a force to reckon with her talent and unique personality.

She was born to the family of Musa Garkida, an ex-military man and Hajiya Hadiza Musa (Anna), a professional Nurse from Mali.

She is the 34th in a loving family of 36 and had so much fun while growing up.

She attended command Children Nursery and Primary School for her primary education and Queen Amina College for her secondary education.

She also obtained a diploma in Mass Communication at Kaduna state polytechnic.

She got the opportunity to feature in ‘Hattara’, an awareness movie about HIV/AIDS as sponsored by Kaduna state government.

Safiya came to limelight for her exceptional performance in the movie “Madadi”. She also starred in the movei “Jinse” alongside Aminu Shariff Ahlan, and ‘Jigo’ alongside Mansoor Sadiq and Abba Al-Mustapha.

Safiya Musa got married to Abdullahi Yakubu Dankumbo on February 15, 2013 at her father’s residence in Garkida, Adamawa state.

She and her husband welcomed their first child in January 2014. Her husband is a businessman based in Zaria, Kaduna state.