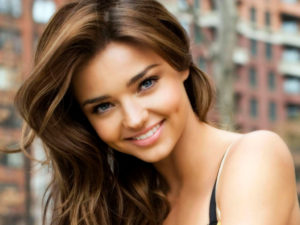 Miranda May Kerr popularly known as Miranda Kerr is an Australian model born on April 20, 1983.

She was born in Sydney and raised in Gunnedah, New South Wales.

Miranda Kerr grew up with her parents Therese and John Kerr and also has a brother Mattew who is two years younger.

She is of mixed heritage; English, Scottish and French.

Miranda’s family moved to Brisbane just for the purpose of having a city life experience. She enrolled at Hallows school in 2000 after which she studied Nutrition and Health Psychology before pursuing a modelling career.

Miranda started her modelling career at the early age of 13 where she won the 1997 Dolly magazine/impulse model competition.

She got signed to Chic Management where she appeared in a series of beachwear commercials, modelling for brand such as Tigerlily, Roxy, Billabong Girls and many others. 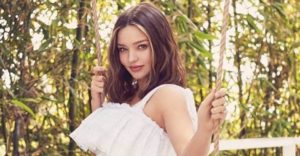 Just after having a number of runway appearances, she got signed with NEXT Model Management working with brands such as Alex Perry, Lisa Ho, Voodoo Dolls, Baby Phat, Bettina Liano, Nicole Fintti, L.A.M.B, Jets, Neiman Marcus, Anna Molinar, Roberto Cavalli and many others before proceeding to Maybelline New York in 2006.

Miranda got married to Orlando Bloom in 2010 and had her first child, Flynn in January 2011. She separated from Orlando in October 2013 and married Snap chat co-founder Evan Spiegel in 2017 where they welcomed their first child together named Hart in May 2018.

Earlier before, Miranda had previously dated the finance broker Adrian Camilleri in 2003 also Jay Lyon (Brent Tuhtan), the lead singer of the band, Tamarama from 2003 – 2007.

Aside modelling, Miranda has also appeared in a number of music videos including Pharell Williams and Kanye West song “Number One” and also featured in the movie “The Bling Ring”.

Miranda Kerr who has consistently ranked on the Forbes list of highest paid model since 2008, is one of the most influential Australian model with an estimated net worth of $18 million dollars.