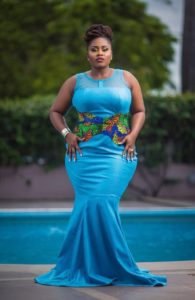 She was born in Mankessim, Ghana but moved with her family to Kentucky, US where she spent her early life and had attended Wilmore Elementary school.

Lydia relocated with her parents to Ghana at the age of nine. She continued her education at Akosombo International School and completed her senior secondary education at St Louis secondary school, Kumasi . She obtained a Bachelor’s degree in English Language and Information studies at the University of Ghana.

Lydia Forson discovered her love for acting at the age of 18 and got her first role in the movie “Hotel St. James” in 2005.

Ever since Lydia came to limelight, she has starred in numerous movies such as Run Baby Run, Different Shades of Blue, A sting in a Tale, The Perfect Picture, Phone Swap, Masquerade and many others.

Lydia Forson relationship status is still unknown but she has once revealed that she’s not married after so many online rumor.