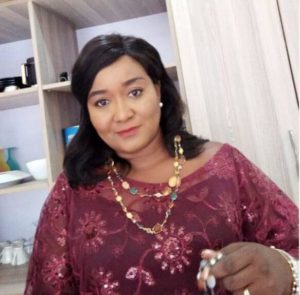 She’s quite talented, and creative having able to carve a niche for herself in the industry.

Here’s her biography in full details.

Ebele is from a devoted catholic family; her mother was a full television producer and her father an engineer.

She attended Santa Maria primary school and Queen of the Holy Rosary Secondary school for his primary and secondary education respectively. She obtained a Bachelors degree in Theatre Arts at the University of Calabar.

Ebele Okaro joined the Nigerian movie industry in 1996 and since then she has warmed herself into the hearts of movie goers having able to give excellent interpretaion of her roles in most movies.

She produced and starred in 2014 movie “Musical Whispers” which had top actors like Chioma Chukwuka and Kalu Ikeagwu.

Ebele Okaro is married into the Onyiuke family and blessed with beautiful children.

Ebele Okaro has starred in more than 150 nollywood movies and television series such as:

Ebele has won numerous awards for her effort in the nollywood industry which include: