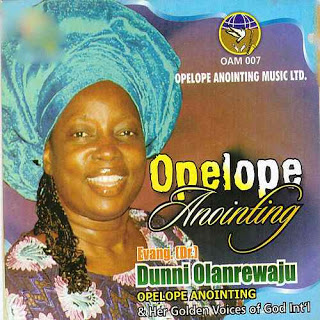 Dunni Olarenwaju who is well known as “Opelope Anointing” is a Nigerian gospel singer and song writer born on December 2, 1960.


She is also a televangelist who have used her songs to minsiter into the lives of many Christians.

Here are the other 7 interesting facts about her:

1. She was born at Akinyele, a local government area in Oyo state into a Christian family.

2. She had her primary education in a village called Sannu and attended Elekuro Secondary Modern school in Ibadan but left to Ejigho high school in Lagos state where she finally dropped out to do gospel music.

3. Her debut album “Adun-Igbeyawo” was released in 1998 but was only famous for the song “Opelope Anointing”.

4. She launched her 20th album on October 26, 2014 which had some renowned Nigerian gospel singers in attendance including the likes of Joseph Adebayo, Adelakun, Tope Alabi, Bola Are, Funmi Aragbaye and so on.

5. Her daughter Ibironke got married in May 2013 to Olawunmi which also had some special guest in attendance such as Mega 99, Bola Are, Funmi Aragbaye and many others.