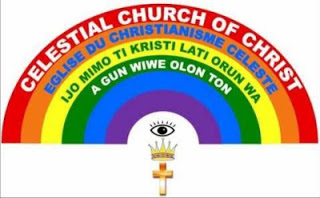 The Celestial Church of Christ known as the white garment church was founded in Port Novo, Benin in 1947 by no other persan than Sameul Joseph Oshoffa.


The Church which is often called in a short form as Cele, had since grown from its early days in the Republic of Benin to be very popular all over the world.

Like every other churches around the world, Cele also has its own unique belief which you will find out as you read on but what is more important is the church’s logo and what the colours on it represent.

For now, lets take a lok at the Church’s history:

It all started when Joseph Oshoffa  received a divine vision which led to the founding of the Celestial Church of Christ in September 1947. There have been so many healings which were linked to Oshoba and had since led to the growth of the ministry.

However, Oshoffa was involved in an accident which led to his death in 1985. He was succeeded by Alexander Abiodun Bada who became the head of the church till 2000.

The members or those who worship in the Celestial Church Of Christ are known as Celestians and according to the founder, he said the name of the church was inspired by a vision he had that the Church memebers should adore Christ just like the angels do. So the name indicates that they see themselves as the representatives of the heavenly on earth.

Below are some things peculiar to the Church:

Here are the meaning of what each colour on the Celestial Church of Christ Logo represent.

In conclusion, the Celestial Church which is always painted with white and blue signifies power in the spirit.