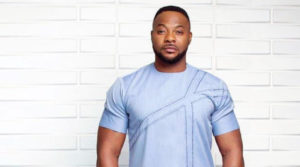 Bolanle Ninalowo is one of the prominent actor in the Nigerian movie industry born on May 7 in Lagos.

The tall, handsome and talented actor is the second child in a family of eight children.

He hails from Ikorodu part of Lagos where he was raised before moving to chicago in the U.S at the age of 15.

He spent 15 years in Chicago where he obtained a Bachelor’s degree in Accounting from Dewry University. He also obtained a masters degree in Marketing from Kellar graduate school of Management.

Nino as fondly called worked as a banker in General growth properties in Chicago after his studies. He returned back to Nigeria in 2010 and decided to fall back on his childhood dream of becoming an actor.

He started as a producer and came out with “REBIRTH” but didn’t get that recognition as expected due to lack of experience.

Bolanle decided to give acting another shot in 2014 where he called on his cosuin Rukky Sanda for help. Of course, she gave the hunky actor his first roleand guess what, that was how Bolanle came to limelight.

Ever since then, he has starred in several tv series and movies including Husbands of Lagos, Baby Shower, The Guardian, Walking Away, Picture Perfect, to mention a few.

Aside acting, Bolanle Ninalowo also runs a car dealership company left to him and his siblings by his father.

He has also won numerous awards, one of such is the Revelation of the year at Best of Nollywood Awards in 2010.