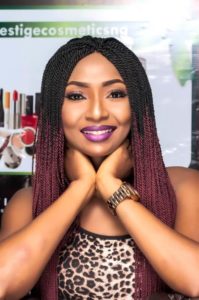 Belinda Effah is one of the prominent nollywood actress and movie producer born on December 14, 1989.

She’s such a beauty to behold and a talent to reckon with in the industry.

Belinda Effah is from Cross River state where she had both her primary and secondary education.

She obtained her Bachelors degree in Genetics and Bio-Technology at the University of Calabar.

Belinda began her acting career in 2005 where she first made her acting debut in the television series “Shallow waters”.

She later took a break from the series for the reality show “Next Movie Star” where she came 5th.

She has also been a television presenter for the Nigerian Entertainment station, Soundcity before she left to start her own TV show called “Luch Break with Belinda”.

Belinda has starred in several television series and movies such as

Belinda is a single mother of one who is still finding love.

She was romantically linked to actor Daniel K Daniel but we never get to hear anything from the duo as for the relationship.

Belinda Effah in the course of her acting career has got so many nominations and received numerous awards.

Below are the awards won:

Belinda Effah is one of the most sought after actress in the nollywood industry. According to Forbes, her net worth is estimated at $8,500 USD.

1 thought on “Belinda Effah Biography And Net Worth”