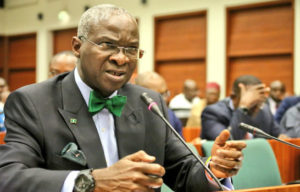 Born Babatunde Raji Fashola on June 28, 1963, is a lawyer (SAN) and a Nigerian politician who is presently the federal minister of power, works and housing.

Fashola siblings include Damola Fashola, Olayinka Fashola, Adewale Fashola and many others.

He obtained a Bachelor of Law degree from the University of Benin.

Fashola was called to the Nigerian Bar as a solicitor and advocate of the Supreme court of Nigeria in November 1988 after completing his programme at the Nigerian law school.

Fashola is the second law graduate from the University of Benin and the first member of the Nigerian Law school graduating class of 1988 to be conferred with the professional rank of Senior advocate of Nigeria.

Fashola is also a member of the Nigerian Bar Association and Associate of the Chartered Institute of Taxation of Nigeria.

Babatunde Fashola biography isn’t complete if we don’t talk about his political career.

He was chief of staff to Asiwaju Ahmed Tinubu and also served in Lagos state in various capacities such as:

Babatunde Fashola later succeeded Bola Tinubu as the governor of Lagos state from May 29, 2007 to May 27, 2015. He handed over the office to Akinwunmi Ambode.

Lets not forget that Babtunde Fashola also have a lovely family as he is married to his wife, Abimbola Emmanuella Fashola and they have children.