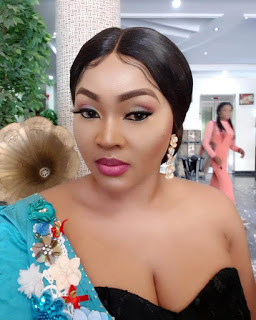 One of the outstanding personality we will be discussing about is the actress with beauty and brain, Mercy Aigbe who is known for her intriguing roles in the Yoruba language movies.

Mercy Aigbe who is the second child in a family of five, was born in Delta state part of Nigeria.

She went to Maryland comprehensive secondary school at Ikeja, Lagos.

She also attended Polytechnic, Ibadan, Oyo state where she received her OND in finacial studies and also obtained a Bachelors degree in Theatre Arts from the University of Lagos.

She started her acting career with soap operas and later joined the industry fully in 2006 where she starred in the movie “Ara” which brought her to limelight and hence became one of the most sought after actress in the Nigerian movie industry.

She has acted in more than 150 movies in both Yoruba and Englsih scene. She’ quite notable for the following movies; Afefe Ife, Okanjua, Ile oko mi, igberaga, iro funfun, Ipese, mafisere and many others.

Her talent speaks for her though but her beauty can’t be overlooked as she’s also known for her unique style and dressing.

Her dress to the 2016 edition of the Africa magic viewers choice awards became the topic on social media.

The uniquely style dress which was created by Nigerian designer, Ceoluminee, also earned the actress more followers on the major social network.

Mercy Aigbe is also into fashion and she has a boutique where she deals with all kinds of clothing accessories including shoes and bags.

Mercy Aigbe got married to a hotelier and business man, Lanre Gentry which made her adopted the name Mercy Aigbe-Gentry.

She also have a son and a daughter but her relationship with her husband soon came to an end due to irreconciliable differences with the actress pointing to domestic violence.

She has won several awards including Best actress in yoruba at the City People entertainment awards, Best actress in supporting role, Yoruba movie personality of the year and many others..

Mercy Aigbe net worth is estimated at N85 million.