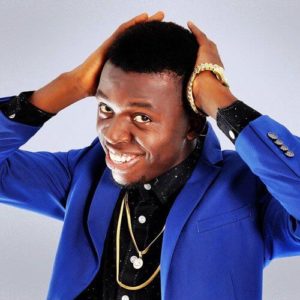 Akpororo came to limelight after his performance at Basket mouth’s show, “Laff and Jam”.

His style of comedy is simply a blend of circular and church related jokes that has got him fans on social media.

He reveals that he often crack jokes about lunatics because he was once an attendant to mentally-ill people who came to the church for spiritual healing.

Lets get to know more about his biography and the untold story of how he met his wife.

He had his early education in Warri, Delta State. He also studied Sociology at the Lagos State University.

Akpororo started off his career as a gospel singer until in 2008 when he won a National comedy challenge.

He continued to strive for the best when he moved to Lagos and contest twice in the AY Open Mic Challenge when he came second for the first try and emerged winner at his second try.

Akpororo rose fame after his amazing performance at Basketmouth Laff and Jam comedy show and since then his career picked up, doing shows across the country and abroad. 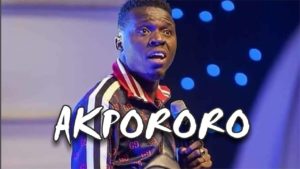 He organized his own first comedy show “Akpororo vs Akpororo” which was held in Shell Hall Muson Centre, Victoria Island, Lagos, on August 12, 2014. The show was a never experienced one for several dignitaries who were in attendance, It was encompassed with laughter unlimited.

Aside comedy, Akpororo delved into acting in 2014 while starring in movies such as Headgone and The Antique.

Akpororo is a comedian with many accolades. He won the Best Comedian of the Year of 2014 FM Comedy Awards and Best Comedic Act at the 2015 Golden Icons Academy Movie Awards. He has got numerous nominations such as:

Akpororo met his wife, Josephine Ijeoma Abraham when she was with Explicit Dance Group.

Actually the two became lovebirds and got married without even dating. They got married on November 14, 2015 in Surulere, Lagos State and their union is blessed with a baby girl.

Akpororo got a two year deal with telecommunication giants Airtel Nigeria in June 2015. He also has a Range Rover SUV and a mansion in Lekki.

Akpororo is one of the talented Nigerian comedian with an estimated net worth of $1.4 million