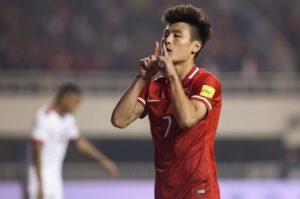 Wu Lei is a professional Chinese footballer who plays as a right winger for the Chinese national team and Spanish club side, RCD Espanyol.

He holds the record of top goal scorer for the Chinese Super League Champion Shanghai SIPG and also the youngest player to have appeared in a Chinese professional league match at the age of 14.

Wu Lei was named “The Chinese Maradona” by the Argentinian site TyC Sports.

Wu Lei began his football career at the age of 12 after joining the youth academy, Genbao Football Academy in 2003.

He was with the youth academy for a couple of years before he made his professional career with the third-tier side Shanghai SIPG where he made his official debut on September 2, 2006 in a 5-3 loss against Yunnan Lijiang Dongba, making him the youngest ever player to play professional Chinese football at te age of 14.

Wu assited the club to win the third-tier title and they got promoted to the second tier at the end of the 2007 league season.

He scored his first goal for the club on August 30, 2008 in a 2-0 win against Qingdao Hailifeng, which made him the second youngest goalscorer in Chinese football at the age of 16.

He also scored a hat trick on June 2, 2013 in a 6-1 win against Shanghai Shenxin, which made him the second youngest player to score a hat-trick in the top tier. 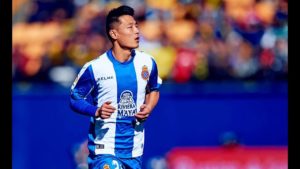 However, Wu Lei signed a three year contract with an option for an additional year for the Spanish club side RCD Espanyol on January 28, 2019on a reported fee of £2 million.

Wu made his debut for the club on February 3, 2019 against Villareal while coming in as a substitute for Didac Vila at the last 12 minutes of the match. He was watched by more than 40 million viewers in China.

Wu has has represented China in U-17 and 20 competitions. His senior national team debut came on February 14, 2010 against Hongkong. Up till now, he has earned 48 caps and scored 8 goals for the national team.

Wu Lei is married to his lovely wife, Hui Ruoqi and they have a beautiful daughter born in 2014.

Wu Lei whose net worth has not been estimated is reported to earn a salary of around $1 million frm his previous club.