He is known to play as center-forward for the Slavia Prague.

Olayinka is fast becoming one of Nigeria’s brightest prospect with his amazing talent and skills.

He has fast pace with a height of 6 ft 2 inches.

Peter Olayinka started his career at a very tender age while playing football on the streets before being one of the lucky football exports to Europe.

He first of all signed for a club in Albania called FK Bylis at the age of 16. He was later loned to North Cyprus for a year before he returned back to Albania to join Skenderbeu.

His talent soon got him a move to Belgian side, KAA Gent where he was loaned twice; FK Dukla Praha and then Zulte Waregem where he netted 11 times in 41 appearances.

Peter Olayinka estimated salary is said to be 1.375.000 euros per year according to football-lifestyle. 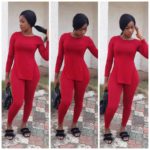