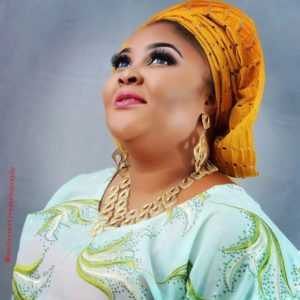 Ireti Osayemi Adeoye is a Nigerian actress, television personality and philanthropist known for her roles in yoruba indigenous movies.

She was born on January 14, 1982 in Lagos state where she spent her early days.

She’s a beautiful, endowed and talented actress known for her excellent delivery of scripts and interpretation of roles.

She’s a force to reckon with in the industry, but why don’t you read on to know more about her age, state of origin, marriage, who her husband is and so on.

Ireti Osayemi, 36, and her parents had lived in Liberia before coming back to Nigeria during the Liberian civil war.

She hails from Lagso state where she attended Ajumoni secondary school and also obtained a Bachelors degree in Economics at the Lagos state University.

Ireti Osayemi began her career professionally after joining the Nigerian movie industry in 1999. She got her first role in the movie “Cassanova”.

She features in both Yoruba and Englsih speaking movies having worked with the likes of Odunlade Adekola, Funke Akindele and Eniola Badmus.

Ever since she came to limelight, she has starred in over 150 movies including The Return of Jenifa, Spiritual war, Iseju meji, Ife Owo, Tomo Tiya, Torn Apart, Onfa Ife, Gbotemi and so on.

Ireti Osayemi got married in 2008 to Bakky Adeoye who is also a movie producer and their marriage is blessed with two children.

Ireti had her first child in 2007 before they got married and had her second child in 2009 after their marriage.

Recently, there were divorce rumors as per her marriage but the beautiful actress had denied the whole story while saying there is no such thing.

Ireti Osayemi is an amazing actress with lots of talent. She can fit into any role given to her and for effort she has received numerous awards which include:

Ireti Osayemi is one of the most sought after actress in the nollywood industry with an estimated net worth of $550,000.