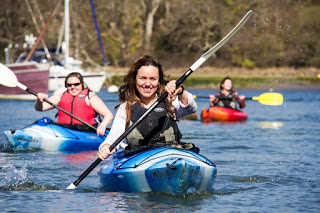 Here’s a short wiki and summary of Kayaking, it’s meaning, types, and where its been practiced.


Kayaking simply means the use of a Kayak for moving across the water. It is different from canoeing in the aspect of sitting position of the paddler and the number of blades on the paddle.

So what is a Kayak?

A Kayak is a low-to-the-water, canoe-like boat whereby the paddler sits in a forward position, legs in front while using a double bladed paddle to pul front-to-back on one side and then the other in rotation.

Kayaks came into being a thousand years ago where they used driftwood, skeleton of whale to create the body.

The Kayaks which literally translates to hunters boat where created mainly for hunting and fishing.

During the mid 1800s, Kayak had became increasingly popular among the Europeans as the German and the French began Kayaking for sport.

So in 1931, Adolf Anderle became the first person to Kayak down the Salzachofen Gorge and that was where modern day white Kayaking was belived to have begun.

However, it all continued as Kayak races were introduced in the Berlin Olympic Games in 1936 and aslo progressed as a fringe sport in the U.S until the 1970s when it became a mainstream popular sport. Now, more than 10 white water Kayaking sports events are featured in the Olympics.

What are the types of Kayaks?

Kayaks usually vary in types, shapes and sizes. The most common types of Kayaks are:

1.
Recreational Kayaks which are mainly designed for the casual paddler
interested in fishing, photography or peaceful paddle on a lake.

These
boats makes up the largest segment of Kayaks sales. Also when compared
to other Kayaks, Recreational Kayaks have a larger cockpit for easier
entry and exit.

2. Sea Kayaks are designed for travel by one or more paddlers on open water

3.
Surf Kayaks usually have flat bottoms and hard edges. Their design
promotes the use of an ocean surf wave as opposed to a river.