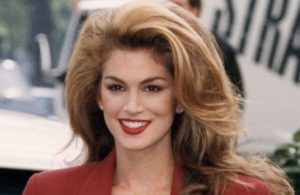 Cindy is the daughter of John Daniel Crawford and Jennifer Sue Crawford-Moluf. She has two sisters, Chris and Danielle as well as a brother, Jeffery, who died of childhood leukemia at age 3.

Her family is of mixed ethnicity of German, English and French.

Cindy attended Dekalb High School and earned an academic scholarship to study chemical engineering at Northwestern University and later dropped out to pursue a full-time career in modelling. After working for photographer Victor Skrevneski in Chicago, she moved to New York City in 1986 and signed with the Elite New York modelling agency.

With a height of 5 feet 9 inches, Cindy have been able to stand tall among other supermodels. 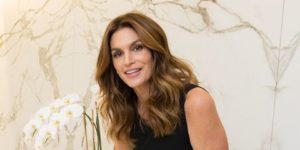 She has graced the cover of many magazines for Vogue, People, Elle, Cosmpolitan and Allure and has also walked the runways for brands such as Versace, Chanel, Dolce & Gabana, Ralph Lauren, DKNY, Valentino, Calvin Klein, Christian Dior and Michael Kors.

In 2000, Crawford decided to quit full-time modelling and now appears in fashion magazines. In 2005, she created a line of beauty product with Jean-Louis Sebagh called Meaningful Beauty for Guthy-Renker.

Crawford has appeared in a number of movies such as Unzipped, Catwalk, Fair Game, 54, Beautopia, The Simian line and so on. She also appeared in the video for George Michael’s hit “Freedom”, Duran Duran’s “Girl Panic”, Taylor Swift’s “Bad Blood” and so on

Crawford got married to actor Richard Gere in 1991 and divorced in 1995. She later remarried to businessman and former model Rande Gerber on May 29, 1998 and they both have two children; son, Presley Walker Gerber (born July 2,1999) and daughter Kaia Jordan Gerber (born September 3, 2001). Both of them are into modeling.

Cindy Crawford is one of the most influential American model and businesswoman with an estimated net worth of $100 million.