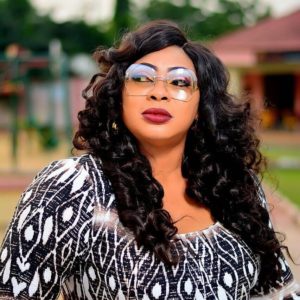 Ayo Adesanya is one of the outstanding actress with an amazing talent in the nollywood movie industry.

She is a Nigerian actress, movie producer and director born on August 11, 1969 in Ijagun, Ijebu, Ogun state.

She attended St Ann school, Ibadan before obtaining a Bachelor’s degree in Mass Communication from the University of Ibadan, Oyo state.

She started acting in her secondary school dsys where she too part in drama and stage plays.

She joined the Nigerian movie industry in 1996 where she began acting professionally with her first role in the soap opera “Palace”.

She acts in both Yoruba and Englsih movies having worked with the likes of Olu Jacobs, Pete Edochie, Desmond Elliot, Joke Silver, Uche Jombo, Kate Hensahw and many others.

The beautiful actress was married to Goriola Hassan before they separated. TRhey both have a son.

Ayo Adesanya is not only beautiful, she’s disciplined and known for her excellent interpretation of roles.

She has starred in over 100 nollywood movies and televivion series which include:

She has also won numerous awards such as