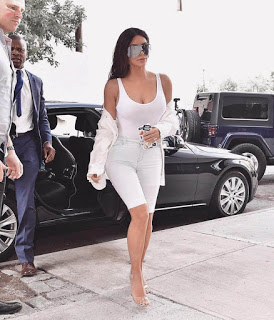 Kimberly Kardashian West who is popularly Known as Kim Kardashian is an American television personality, socialite, actress and model born on October 21, 1980.


She first gained recognition as a friend and stylist of Paris Hilton but later rose to fame after her 2003 s*x tape with her former boyfriend Ray J leaked online in 2007.

With the fame already on ground, she and her family began to appear in the E! reality television series keeping Up with the Kardashians.

Ever since she came to limelight, she has grown to become an influential persoanlity  with large followers across the various social media platforms including twitter and instagram.

1. She was born to an Armenian-American father, Roberts and her mother, Kris (nee Houghton) who is of Dutch, English, Irish and Scottish ancestry.

2. After her parents divorced in 1991, her mother got married to the 1976 summer olympic decathon winner, Caitlyn Jenner (then Bruce).

3. She has three siblings Kourtney Kardashian, Khloe Kardashian and Rob Kardashian. She has step brothers, Burton “Burt”, Bradon and Brody and also have half sisters, Kendall and Kylie Jenner.

6. She made a film debut in 2008 where she played the role of Lisa in Disaster movie.

7. She also filmed a music video for a song “Jam (Turn it up) as directed by Hype Williams.

8. In 2012, Kim and her family filmed a music video in the Dominican republic to Notorious B.I.G’s song “Hypnotize”.

9. In 2014, sh released a mobile game for Iphone and Android called Kardashians: Hollywood.

10. She also released a portfolio book called Selfish in May 2015. ‘Selfish’ is a 325-page collection of self taken photos of herself.

11. Also in 2015, she released an emoji pack for ios devices called Kimoji.

See Kim Kardashian photos with her family below 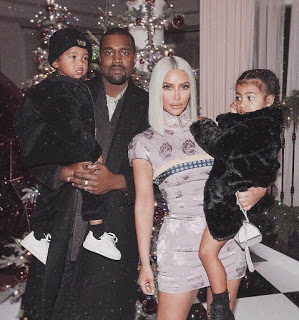 13. She got married to her husband Kanye West on May 24, 2014 at Fort di Belvedere in Florence, Italy and their union blessed with three children North, Saint and Chicago West.

14. Her wedding dress was designed by Riccardo Tisci of Givenchy and some guests’ dresses designed by Michael Costello.

15. She has won several awards including Choice TV: Female Reality/Variety star for her reality show, Keeping up with the Kardashians.

You can reach out to Kim Kardashian on instagram @kimkardashian