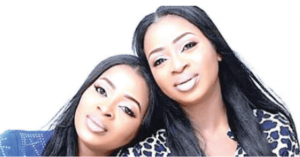 Popular nollywood actresses, Chidinma and Chidiebere known as Aneke twins have opened up on how they had hawked on the streets of Enugu to support their mum after the death of their father.

The made it known while addressing students at the Promasidor Harness Your Dream career guidance initiative held at Queen’s school, Enugu, recently.

When our father was alive we had everything but when he died, everything changed. There was nobody to help and so we decided to inspire ourselves. If we had the kind of opportunity that you now have, we wouldn’t have studied the courses we studied in school. We were in our church drama group and then found out that we had the talent for acting.

“Somebody invited us and then we began to act but we were still hawking akara (bean cake) and bread to support our mum and going to school. But after school, we went for auditioning. We found out that we needed to know more about acting.”

The actress twins joined the nollywood industry in 1999, came to limelight with a lead role in the movie “Desperate Twins”. They have appeared in over 50 nollywood movies and won several awards.