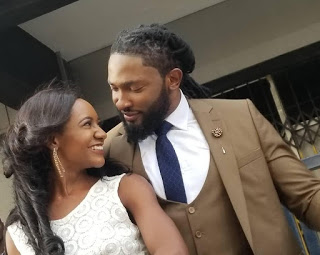 
Both couple to be shared the news on their social media page with Uti posting the picture above and caption: “👀👀👀#Anticipate 👀👀👀 #November26th2017 #WatchThisSpace #LivesWillBeChanged.”

Uti Nwachukwu is a Tv presenter at the popular tv programme, JARA with Helen Paul.

Simi Drey is also a Tv presenter, actress and model who was born in London but later moved back to Nigeria.

The beautiful presenter who had a first class degree in Broadcasting, Journalism and Media communications, has also worked with several television and radio stations across UK and Nigeria including doing interviews for some top celebrities like Ramsey Noah and Jidenna.

Sim Drey is also a host at the Beat 99.9FM where she uses her talent to entertain the listeners.