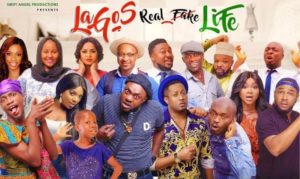 “Lagos Real Life” which will be out in cinemas on November 16, also stars the likes of Annie Idibia, Nonso Diobi, IK Ogbonna, Josh 2 Funny, Mercy Aigbe, Nedu Wazoia, Efe Irele, MC Lively and many others.

The movie comes as a follow up to the actors previous success as  film maker with the movie “Divorce Not Allowed”.