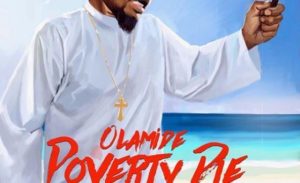 Olamide thrills once again on a Pheelz produced beat with another spiritual single titled “Poverty Die”.

Olamide has been giving fans something to talk about and his fellow music artists a run for their money with every of his releases.

Ever since he dropped the viral single “Science Student”, Olamide has been on a non stop with hit singles and here on his new release “Poverty die”, he advises on a 3 days revival to put a big stop to poverty.

“Poverty Die” which is a potential hit just in time for the festive season, serves as a follow up to his already waves making singles “Motigbana” and “Bugle”.