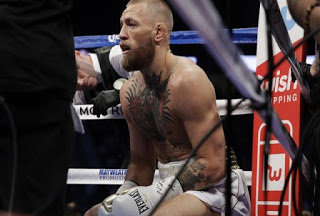 Nevada Atletic Commission had announced that Conor McGregor will be out of the ring for 60days after his loss to Floyd Mayweather.


According to MMA Fighting, they quoted a press statement issued by the Nevada Atletic commission, saying that McGregor who lost to Floyd Mayweather on Saturday at Las Vegas, T-mobile Arena, in his first professional boxing fight, will now be forced to sit down for a minimum of 60 days before returning back to the ring along with other five fighters.

McGregor was defeated at the 10th round with a flurry of punches after an early strong performance but even in defeat, McGregor still impressed a lot fans after they had written him off his chances of winning.