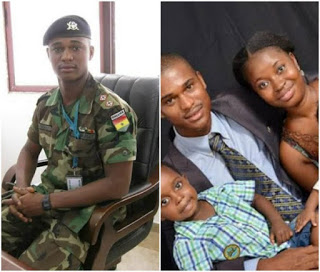 The faamily of the lynched ghanaian soldier, Captain Maxwell Mahama, has announced that he would be buried on friday June 9, 2017.


According to the family spokespersons, Zakaria Sakara and Ibrahim Samed, three funerals would be held for the captain, one in Accra, one in Bole and the last one at Tumu which is the grand mother’s home town.

Also, the family will also have a thamksgiving service in memory of captain Mahama on Sunday June 11, 2017.

Captain Mahama was lynched by the residents on Monday, May 29, 2017, after he was he mistakook for an armed robber with regards to a false alarm raised by a lay.

The Ghanaian authorities have nabbed about 18 people affiliated with the wicked act while seven suspects have been officially charged of the late captain Mahama and aree on remand, the rest will be arraigned before the court on Monday.

Captain Mahama is survived by his lovely wife and two children.