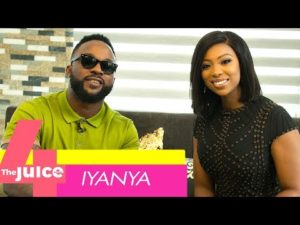 Nigerian afropop and R&B star, Iyanya finally reveal the real reason behind his departure from the record label Made Men Music Group which was formed alongside Ubi Franklin.

Iyanya who has been quite about the issue all this while finally clears the air on the main reason for leaving the record label in an interview with The Juice on Ndani TV.

In the interview, Iyanya made it known that contrary to the popular belief people have come to accept that he sold his shares in Made Men Music, he didn’t do that, rather he left because there was so much darkness in the record label.

What people don’t know is, I didn’t sell my share. People see me and say oh. why did you sell your share? I didn’t sell my shares, I left Made Men at the time because there was so much darkness. In the midst of all the wings, I decided to let that go. Mavin was … shout out to Jazzy… Jazzy gave me that platform to put music out because I left Made Men and I didn’t want anything from Made Men, so Jazzy just said look, men, you’ve built something over the years and starting all over it’s not going to be as easy as you think, so just put out music from here and work on something. So people really thought I signed to Mavin but it wasn’t like a legal signing, it was just love. And then Temple Music came, when Temple music came, I love the vision, I love the dream and I was like Okay, let me try this. and that was when I released Up To Something, Hold On, I mean, Good Vibes. And after that, it was time for me to move, because I felt like I got to the point where I have to put out my own thing, have m,y own family, have my own team, me and Alex…

Iyanya also explained what he meant by ‘darkness’ when referring to his time at the record label where he said that in as much he would not want to delve into the issue, he also believe that sometimes you have to clear the air as people need to hear the truth.

When I said it was darkness, I was not myself anymore because I felt like there was no trust anymore. Because at the time I was singing I co-owned Made Men with Ubi but I later realized that my name was not in any of the forms I signed… and I was broken… and that was the beginning of me just saying to hell with everything.” The hurt of being betrayed could still be felt in his voice as he looked like his mind went back to that time. He continued “To be honest, Mr. Amanju Pinnick was the one that brought us together because at that point, my spirit, my mind, my soul left the whole thing, at that point I was like I don’t care, I’m going to start all over, as long as I’m happy. as long as I’m in a good space to make music, I’m fine.

The Kukere crooner also gave hint about his time at Mavin records. He said Don Jazzy took him in as a member of the Mavin family and that came as a healing process for him after what he experienced with Ubi Franklin.

That was healing for me, that was the best time of whole situation I was in, that was the best moment because Jazzy just opened his family and said look, you’re one of us and everybody just showed me that love coz it came from Jazzy. So from Jazzy to Tiwa, to Baby Fresh to everybody, it was just love and that really gave me life because, to be honest with you, I was broken. Like I was broken!

Iyanya also revealed that he hasn’t been quite, he’s probably doing some underground work most especially for his EP, The Rebirth which is coming out soon.