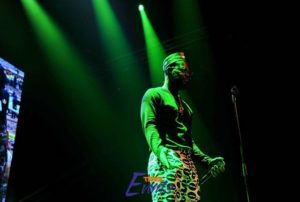 Ever consistent Nigerian rapper, singer and song writer, Folarin Falana popularly know as Falz as announced the release date for his forthcoming album “Falz The Experience 2”.

The singer made the announcement last night to a large crowd at the becoming Falz Trace live concert held at Terra Kulture in Victoria Island, Lagos.

During the vent, Flaz thrilled his fans with lots of performances from his hit singles such as “Soft work”, “Soldier”, “Karishika” and his controversial song “This is Nigeria”.

The rapper used the opportunity to announce his forthcoming album which is set to be released on December 30, 2018.

He also unveiled the signning of a new artiste, Sir Dauda to Bahd Guy records, being the first artiste to be signed to the record label