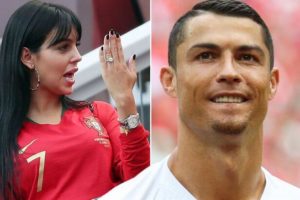 Cristiano Ronaldo has not made things official with his baby mama, Georgina Rodriguez but a lot has been said just with the flash of her diamond ring during Portugal wednesday match.

Ronaldo scored the winning goal as they defeat Morocco by 1-0 and his girlfriend was there to support her man on the pitch.

There has been a lot of talk about Cristiano Ronaldo proposing to her back in April , few months after she gave birth to their daughter, Alana Martina.

Meanwhile, as Ronaldo killed it on the pitch, Georgina was busy showing off her massive diamon ring… guess it wasn’t so hard to spot.