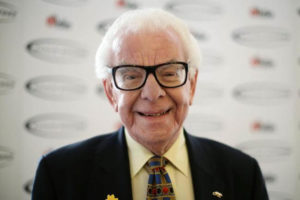 English comedian and writer, Barry Cryer has been given a lifetime achievement award for his comedy career.

Barry has penned jokes for countless comedians and appeared on stage and screen.

He has also worked in comedy since his early theater work in the 1950s and has been recognized by the British Music Hall Society.

The 83 year old has written for legends of British comedy including Ronnie Barker, Ronnie Corbett, Billy Cornelly and Tommy Cooper.

Barry was presented the lifetime achievement award at a ceremony at Brick Lane Music hall. The previous winner of the award was the late comedian Ken Dodd.