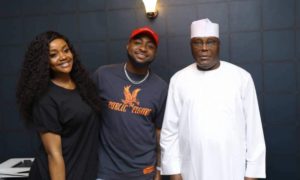 Aspiring Nigerian president, Atiku Abubakar has sparked controversy after declaring Davido as the reigning king in the Nigerian music industry.

Atiku made it known that he enjoyed listening to late Fela Anikulapo Kuti’s music and was a frequent fan at the shrine every-time there was a performance.

He added that in those days, Fela was the king but in this age, it is clear that Davido is the king.

However, Davido has acknowledged the declaration from the presidential candidate while saying that Atiku knows what’s up!

Recall that there is always an argument of who’s the best between Davido and Wizkid.