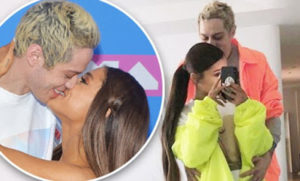 American singer and actress, Ariana Grande has revealed she’s getting married to her fiance, Pete Davidson, 24, in 2019.

The two love birds first walked the red carpet together at the 2018 MTV Music Award.

The 25 year old singer had made her mariage plans known during her interview with Good morning America.

‘It’s gonna be, like, next year,’ she said of the couple’s forthcoming wedding.

She spoke about knowing the SNL funnyman was the one for her and also revealed to Apple Beats1 radio the forseight she had when she first met Pete when she appeared on the NBC comedy staple.

I jokingly said during SNL that I’m going to marry that man – I was joking,’ she said. ‘I thought he was cutest thing, and clever and brilliant … it was a little crush.’