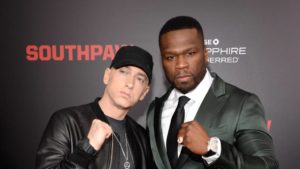 Its been a long time away from the music scene for the American rapper, 50 Cent who hasn’t drop new song for a while now.

The rapper who has disappointed his fans severally about dropping new songs, has now revealed that he has a new collaboration with Eminem and Ed Sheeran.

Although, 50cent has been busy with his tv and film projects lately, he signed a new deal wih Starz for a reported $150 million.

I recorded a song last night with Eminem & ED Sheeran, I had fun doing it we got some heat,” said 50. It’s a rare occasion when 50 has spoken about recording some new music on his social media.